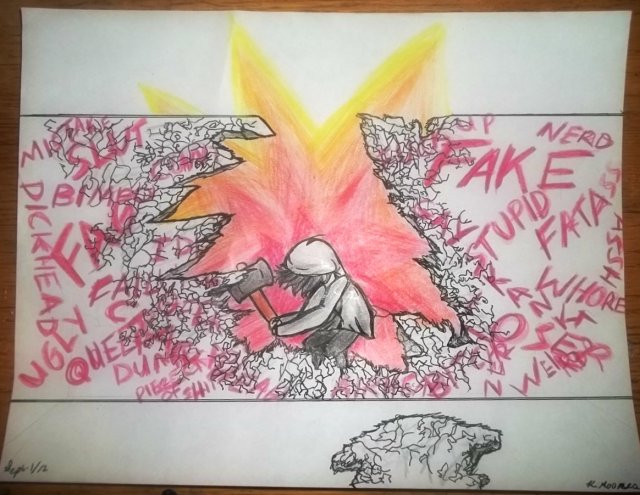 ~Time to Break Barriers, by screameo4
“I have a story about, when I was bullied as a child. I remember when I was 10, I was waiting for the bus when there were three older boys on their bikes, which I didn’t know who they were, slowed down and just spit on me for no reason. I didn’t know what to think and I felt insecure ever since. It made me suffer from anorexia which made me feel ugly and not good enough. By the age of 12, I started having suicidal thoughts. I never told anyone about it. I tried to to do it, but I was too scared. Since my mom become, mentally ill, I was taken to a foster home. A year later, my dad, which I haven’t seen in almost all my childhood, fought for custody and we moved from, British Columbia to Newfoundland. In my new school, I was still mistreated. I was called names, excluded and used. I felt I had no one, but the teachers, always tell me that I was one of the best students they ever had because I had better behaviour then the rest. At the end of the year, I received medals, awards and honours for well performance on work and sports. I have been looked up on ever since.”

His Name Was Steven

Stand Up, Speak Out: End Bullying

It Gets Better Project